Today, challenges and problems in athletics seemingly occur in almost every program and almost on a daily basis. These challenges and problems can involve any number of individuals and groups including, but not limited to, coaches, central office staff, athletes, parents, boosters, fans, and members of the community. The successful handling of such difficulties demands not only a significant amount of time and effort, but requires patience and timely decision making.

One of the reasons that there appears to be such a large number of problems in athletics is because of its high visibility. Athletics is the most visible aspect of education and evokes strong feelings in many communities and schools. The posting of high school football scores in the newspaper is still the one thread that continues to connect some people to a school many years after graduation.

Athletic Directors are asked to solve many problems in their jobs on a daily basis. The following suggestions are ways to help manage situations that may arise.

Difficult people are everywhere. You cannot avoid them. They can be students, coaches, parents, or members of the community. They do not go away with graduation and they do not necessarily go away with coaching changes. There always seem to be someone else to take his or her place. Developing a strategy is a much better way of dealing with difficult people.

Often the difficult people that we meet with are parents. These meeting are some of the most difficult meetings that we have because parents have a hard time being objective about their own children. Some tips on setting the stage for these meetings are:

An Athletic Director should be aware of the options that are available in helping to facilitate meetings with difficult people. These options include, but are not limited to:

Having grown up in a family where one of my parents served as the mayor of our town, it has always been clear to me that almost everything is political. High School athletics is no exception. Whether it is the selection of the boy’s middle school basketball team, the creation of by-laws by the schools in your region, or the selection of projects to be funded by the athletic booster club. At some point in time every coach and athletic director must accept the fact that politics will be a part of high school athletics at some point.

On most occasions, the politics involved in athletics are subtle and could include things like:

Some suggestions that may help one to deal with politics in high school athletics include:

Politics in athletics can be either good or bad, but having an understanding of politics will allow you to survive and thrive as an athletic director.

Problems in the workplace, meeting with difficult people and politics in athletics have been around since the start of high school athletics. Being successful as an athletic administrator will require interactions with people in a multitude of situations. Your ability to effectively negotiate problems will go a long way towards thriving in this profession.

Haefner, Jeff, “A Basketball Coaching Guide – How to Deal with Parents the Right Way and Avoid Unpleasant Problems.

WebMD.com, “Dealing with Difficult People: 17 tips to keep You Sane”.

Building a Strong Staff: This Is Not a Sunday Drive with Kate Leavell – The Jon Gordon Companies

What Are Your Athletes’ Biggest Influences? with Chet Scott – Built to Lead 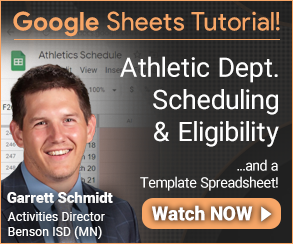